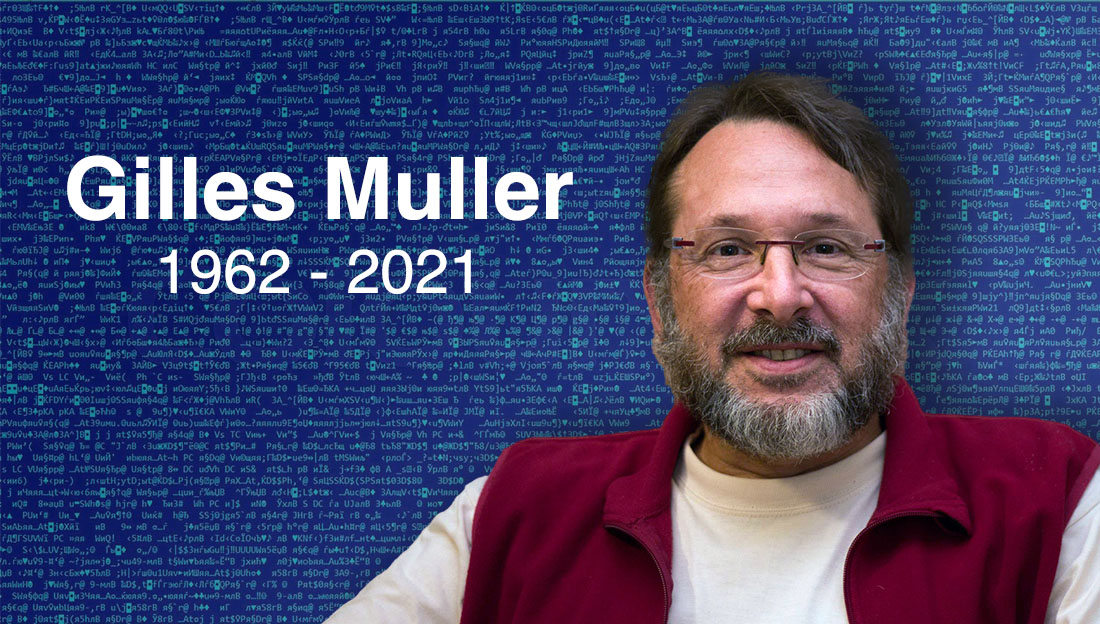 We are deeply saddened to share the passing of our friend, Gilles Muller, aged 59 years. Supported by his loving family, he passed away at Rennes on Wednesday, November 17th, 2021, after three years of battling cancer. His last tribute took place on the afternoon of Monday, November 22nd, at the crematorium of Vern-sur-Seiche. He is survived by his wife, Marylène, his son, Alexandre, his mother, Micheline, and his sister, Cécile. We offer our heartfelt condolences to them, as well as to Gilles’s many friends.

At the request of Gilles, those who wish to do so are invited to donate to the Eugène Marquis Center in Rennes, to help support cancer research (webpage in French only); alternatively, we encourage people to support their local cancer research institutions.

Gilles’ interest in developing operating systems that are correct and efficient was evident since his early days at the Université de Rennes 1, and this subject remained a cornerstone throughout the rest of his career. Gilles formally joined Inria in 1996, co-creating the COMPOSE research group. Among other projects, he worked on diverse domain-specific languages, targeting, for example, networks, scheduling, and the development of device drivers. The latter work resulted in one of the few OSDI papers originating from France, a significant accomplishment for any researcher in operating systems. Deservedly, Gilles was very proud of this work.

In 2002, Gilles joined the Ecole des Mines de Nantes. In 2004, he came up with the idea of automatically translating device drivers from the old stable version of Linux, 2.4, to its (then) new version, 2.6. Gilles oversaw the development of the Coccinelle tool, which accomplished this idea. He worked tirelessly to promote Coccinelle and increase its impact, both in the research community, and among Linux developers. The paper on Coccinelle, which was published in EuroSys 2008, received the EuroSys Test of Time Award, 10 years later; in 2018, a retrospective paper was published about it in USENIX ATC.

In 2009, Gilles joined the Regal team in Inria Paris, and in 2014, still at Inria, he created the Whisper team (“well honed infrastructure software for programming environments and runtimes”), which he headed until his passing.

Gilles was also a remarkable distributed computer systems researcher. His work was marked by exceptionally careful, detailed engineering. Gilles was invariably thoughtful and deep, and his contributions were widely valued. Even in areas where he did not work, he always had thoughtful advice to share. Overall, Gilles’ work was broad and impactful. Many of us share the experience of doing a literature search on a new line of work just to discover that Gilles had contributed key work or established the standard to beat in future work on that topic.

Working with Gilles was a rich experience in many ways. His collaborators especially appreciated the technical discussions with him, noting that he always offered correct and frequently unexpected insights, up to the last days of his life. He had great confidence in his research ideas as well as the courage to develop them fully. He always remained focused on what constitutes good research, what’s important to accomplish, and what may have notable impact. And he always saw the glass as half-full. We hope to spread these views as we continue our work.

Gilles also impacted our field through his outstanding contributions to conferences and program committees. He had an uncanny ability to identify the essential nugget of a paper and steer the discussion away from secondary aspects. His impressive knowledge of the literature allowed him to contrast proposed ideas with papers published years ago, highlighting novelty and commonalities. Gilles struck a balance of rigor and kindness many of us in SIGOPS aspire to. His dedication to this aspect of the SIGOPS community continued amid his health challenges: Gilles was a PC member at SOSP ’21 and NSDI ’21. He had also agreed to serve as the program co-chair of SYSTOR ’22, but he later declined because of his worsening illness, intending to do the job in the future, after getting well. Regrettably, this did not happen.

In parallel with his scientific activities, Gilles was passionate about advancing the professional status of computer systems research in Europe in general, and in France in particular. He fought tirelessly to ensure that the best researchers in the world could comfortably pursue their careers in Europe. His continuous investment in the systems community in France and Europe reshaped the field. The organization in Saint-Emilion in 2002 of the unforgettable SIGOPS European Workshop, his contributions to EuroSys, and his continuous involvement in CFS and then Compas, the national systems conference, were all occasions where he did not count the hours he dedicated to help his community thrive. At the same time, Gilles established collaborations with numerous colleagues and always tried to help young French researchers to succeed, without expecting anything in return, just because it seemed to him to be the right thing to do.

Gilles was a kind, gentle, warm, humorous, and easy-going guy who was loved by very many in our community. And he was so much fun to be around. He was relentless in communicating to the SIGOPS leadership how important good wine is to systems research and systems conferences. His unique warm and humorous style was evident in the enticing presentation he made proposing France as the host for SOSP ’21. Anyone could sense Gilles’ love for our community.

Gilles impacted the SIGOPS community through his generous and welcoming attitude. He made our conferences better by establishing friendship networks spanning a wide variety of people. He paid attention to subtle barriers to entry within our conference culture.

In academic conferences, those of us who have been active for a good few years naturally tend to mostly socialize with the people we already know and like. Those of us who are newer, however, occasionally have a harder time finding our place. Gilles was one of those senior researchers who were actively aware of that and was particularly welcoming to younger researchers at an early stage in their careers. In a room full of mostly unfamiliar faces, Gilles made an effort to be friendly and went out of his way to make newcomers feel more comfortable. He behaved like this with many of us, and over the years, we repeatedly saw him behave similarly towards others: he looked around in search of new faces and “made the first move”. And then he followed up in subsequent conferences. This is probably one reason why he had so many friends who loved him and will miss him.

Gilles was gifted with the ability to nurture depth in relationships with limited opportunities to meet. A shared two-hour ride to the airport through a winter storm would result in a wonderful friendship. Quick conversations over coffee were enough to infuse us with the warmth of old friends.

Gilles was such a wonderful guy. We will miss him very much.

2 thoughts on “In Memoriam of Gilles Muller”